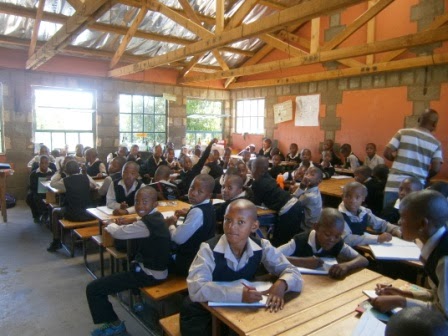 What a few weeks (2 to be exact) first week in school was observation week. Was a serious shock to the system, they definitely have a different way of doing things here.
I’m teaching in a Church school Holy Trinity Primary, it has about 400 children. In Comparison to other schools over here it is fairly well equipped, it has tables and chairs, a few books for a library, and the children have some pens and pencils. The classrooms are very bare, and just have the concrete blocks on show. There is a lot of outside space for the children, but its pretty unkempt, and the soil is unbelievable orange!
Every morning starts with us getting up at 5.45 (Kath makes me a nice brew) Me and Ffion have to be in school for 7.15, and taxis (4 + 1s as they’re called) are pretty unreliable, often they try to fit two of us into one space! The first day the taxi wouldn’t drop us anywhere near our school so we had an absolute trek on foot to get there!
Every morning the children have assembly outside in the sun, all standing in lines, and all march back to their classrooms singing (they can’t stop singing until they’re in the classroom).
I managed to observe every class during this week, they have grade 1-4, and class 5-7, the oldest child is 19 (in grade 7) yes this is a primary school! Lets’ just say I have a lot of challenges ahead of me, engaging the children is one thing, and engaging the teachers is a whole other thing, they’re more preoccupied with personal things than engaging in the lesson. They’re are extremely confused by their curriculum, to be honest I’m a bit confused by some aspects of it; why at the age of 9 is it important to learn to waltz, and at the age of 7 why do they need to learn the difference between common and proper nouns, but yet they aren’t really taught to read (Yes this is in the curriculum).
I tried as much of the school dinners as possible! We all thought school dinners in the UK were interesting at times, you should have a go with these ones! Papa is a bit like powdered rice, they have this pretty much every day, with a load of other stuff; cabbage, pea soup, beans etc. By the second week I was bringing my own lunches.
Spent some really good time with the kids during this observation week, went outside at lunch time and they taught me to make a skipping rope out of grass, and I have taught them all songs, they all just want to touch me and high five me.. every time I walk to my class in the morning I walk past the grade 1s they’re lining up to do it, I feel like I’ve won gladiators and I’m running down the crowd. They’re fascinated by my skin and hair. Over here all children in education must shave their heads, the boys and girls.
The buildings aren’t too bad apart from the lack of electricity, the roofs leaking, and every time it rains you may as well just forget about any teaching, the roofs are corrugated iron. There is one room with electric, and my school does have some reading books, I was also told that they had 5 computers in storage (did confuse me why they weren’t being used) But when I got in on Monday of week two the room had been sorted and cleaned with the computers out!!
Classes aren’t too bad, the most I have in a class is 70, yep the marking takes a life time!
So week two was first week of actual teaching, was again so much to take in, I’ve seriously got my work cut out.
Been teaching a lot of phonics, I’m going to be an absolute pro at it when I get back, luckily I’m enjoying it at the moment! 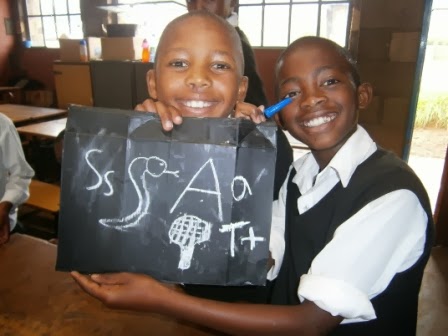 The children are keen and do enjoy my ways of teaching, but it’s a whole new way of thinking for them, they don’t know how to discuss with each other, and haven’t really had to verbally answer questions before. Every time they want to speak they are made to stand up to talk, I personally think its an absolute faf, and you could have asked another question by the time they’ve stood up and sorted themselves out, but hey I guess it’s a respect thing!
Every time you go into a class room and say good morning the whole class stands up and says ‘good morning madam, how are you?’ (Imagine radio 1s showbot saying it, that’s how they sound) you then ask them how they are, and every time is ‘we are fine thank you madam’ (again like showbot) they’re never tired, or great, or happy, or any other emotion other than just fine!
So back to the teaching, the kids are definitely having a tough time with my accent, but again the teachers are too interested in their personal things to try to say it differently for me.
I’ve started working with the Autistic boy in the school, again massive challenge; I allocate an hour a day with him, just one to one and have had some breakthroughs, he wouldn’t really say anything, but now says morning, and will count with me, quite a big step I feel in a week!
I’ve also sorted out a bit of a library, and asked for a bit of a reading scheme to start. None of the children had really read a book before outside of class. I gave them all a reading record, and they are to read as much as possible to someone, there will be a reader of the week from each class. I got to school on Friday and there was a queue of children waiting for me to hear them read, couldn’t believe it! Going to start up a buddy scheme in a few weeks hopefully so that the class 7s listen to the lower years!
The children have also named me Leratho (Lerado) meaning love, they are slowly getting used to having me around, but their reactions when I walk in to teach them is still overwhelming!
We also got invited to celebrate Chinese New Year, went over to our new friends the Mitchells, they have Chinese neighbours, who cooked the most insane feast, with all kinds of everything, we didn’t even know what we were eating half the time, probably for the best, as someone did shout out ‘OH NO I GOT THE BEAK’! Brought in the New year in their pool, under the stars, can’t complain!

Get to go riding with the family this weekend, cannot wait for the break and see the sights on horseback!